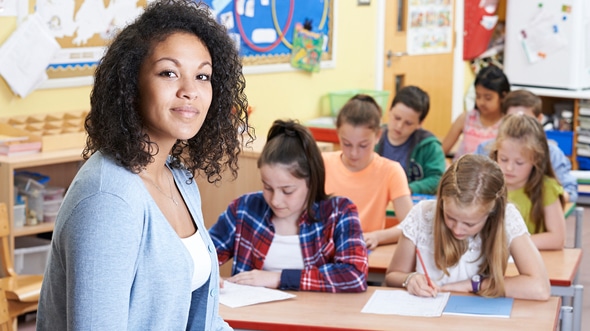 What You Need to Know about Current Teacher Salaries

While a teacher shortage is “old news,” and teacher salaries are slowly increasing every year, one thing is looking up for some potential educators, depending on where you plan to teach.

Although the pandemic has created an economic decline, most public education teachers are getting paid more. According to the NEA (National Education Association), the average teacher salary in the United States for the past 2020-2021 school year was about $65,000, which increased by one and a half percent over the previous year.

However, planned educator raises in some communities were put on hold after the pandemic started because of an economic domino effect that spiraled quickly, and it’s difficult to gauge where issues will stand going forward, as the COVID-19 fallout continues to be highly unstable.

If you hope to be an educator in New York, Massachusetts, and California, the salaries in these locations are the highest in the U.S., on average ranging from $85,000 to $87,000 annually. According to the same study, pay for teachers in Florida, South Dakota, and Mississippi is the lowest, averaging $47,000 to $49,000 per year.

Of course, these figures do not include the different costs of living in various areas of the country. Typically, living in midwest and southern states is less expensive than in the north and west, and these are many of the states where teacher salaries are lowest.

Starting salaries are considerably lower in over 6,000 school districts across the country – often less than $40,000, which can be detrimental to teacher hiring and retention. Urban and rural communities often have a more challenging time attracting and keeping teachers because of each type of district’s unique issues. More educators prefer suburban schools and are more prevalent.

What does all this mean for educators today? Whether you plan to teach in your hometown, will relocate to a large city, or want to experience country life and teach in a rural school, knowing the differences in salary should be part of your overall decision-making process. If you are thinking about teaching, you can prepare for teacher certification exams with PrepForward’s licensure prep.

It is Never too Early to Plan Your Teacher Portfolio

May 13th, 2020 | Comments Off on It is Never too Early to Plan Your Teacher Portfolio | Certification Prep, Teacher's Lounge Blog, Teaching Licenses

Even if you are just beginning your teacher education journey as a freshman, it is wise to think about your portfolio and how it will look by the time you graduate. Your portfolio is the collection of documents that demonstrates your educational proficiency and experience that you present to principals and/or the human resources department at your local board of education when you apply for a teaching position. As you take college classes or add professional development sessions to your repertoire, think about what to include in your portfolio.

A basic portfolio should have:

Generally, school administrators look for teacher candidates who are:

There are many options available for developing your portfolio. Check out some samples online. Dedicate a file drawer or plastic bin at home to collect items that relate to your teacher education portfolio. At the end of each semester, sort the documentation and discard what is not relevant. Re-evaluate your collection each school year and begin to organize the information in a systematic way. When you start your last year of college, it is time to develop an inclusive resume and start gathering letters of recommendation. Sometimes these can take a while to accumulate, so start early.

When you are ready to begin applying to the school districts you choose, you will already have what you need to create a professional, organized, and comprehensive portfolio that is designed to impress and get you that teaching position you want.